Jordan, who aptly entitled the article Short Road To Success For The Long Haul, reported, “Brian Smith came to the Career Center, in November 2014, to pursue his career goal of becoming an interstate long-haul truck driver. Having relocated to San Diego from Montana, the year before, he realized that his series of ‘dead end’ jobs wasn’t working for him, even though he was working.”

Why was Brian so confident about a career in long-haul trucking?  He explained, “My father and brother are both truckers, mostly cattle haulers in the ‘Lower 48’, based out of Montana.  I would go on the road with my dad as a kid, so I know what it’s like and what it takes to be a long-haul trucker. He helped me develop a real passion for it, and I learned that, in so many ways, your truck is your home!”

Jordan continued, “Brian knew that, now at 21, he was legally eligible to drive interstate, and I knew that his overall WIA-eligibility qualified him for sponsored truck-driver training.  So, even before completing the United Truck School program—and ‘acing’ the DMV test for a Class A Permit, which allowed Brian to drive 68-foot trailers with up to 80,000 pounds of cargo—instinctively, we both knew that he was already on the road to being on-the-road!”

During training, Brian was so personable that his United trainers and peers nicknamed him ‘Montana’, and United ‘s Director, Bonnie Trown, commented, “Brian is the perfect example of what a student should be.  He came to us through the SDWP and the WIA program and was very motivated.”

After training and licensing, Brian was hired by a freight carrier and transportation company, headquartered in Omaha, thanks to a pre-recruitment event and Brian’s own networking strategies.  “I loved everything about this experience—the training, the people, the school.  It was amazing and perfect.” Brian said.  Below, KRA Career Agent Jordan Finkelstein, on the left, congratulates Brian Smith on his Career Achievement! 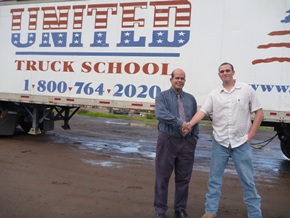 Personable, motivated, and successful, Brian caught the attention of NBC 7 San Diego, which produced and posted a 2-minute videotape about his achievements.  And, if that wasn’t recognition enough, Brian was featured in an “American Workers” ad that aired at the conclusion of the 2015 Super Bowl!