Despite the recurring instability of his chosen occupation, a Tool & Die Maker in the Manufacturing Industry, Michael S. (Michael) maintained a 22-year career—until early 2020.  “I don’t recall ever being unemployed; it was the first time when the Pandemic hit.”

When he applied for unemployment benefits, Michael, 39, learned about the WIOA Program at the KRA Westside American Job Center, operated for the Chicago Cook Workforce Partnership.  When he enrolled, Mike Wolske (Mike) was assigned as his Career Coach.

During one session, they discussed a possible career change—such as IT Network Administration—but decided subsequently to apply Michael’s transferable skill sets to other occupations, with less instability and more security, in the Manufacturing and/or Construction industries. 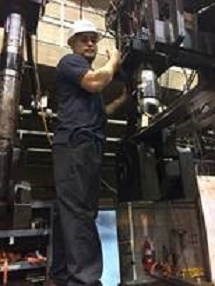 Michael accepted a Lathe Operator position with Columbia Metal Spinning on January 31, 2022, gaining such valuable “upskills” that he passed a hands-on Chicago Transit Authority exam, applied for fulltime employment as a Rail Machinist, and got the job!

KRA/WAJC has a ‘pipeline’ to myriad CTA opportunities via a workforce-services contract for the CTA/Red-Purple Line Modernization Project. However, knowing his customer as he did, Mike believed it would be a more satisfying achievement if Michael found employment entirely on his own; he was right.

“With my success in mind, Mike was always there to point me in the right direction.  Now I have a very stable job—10 minutes from home, with a 6-figure income—that makes me feel accomplished.”

Mike concluded, “Michael was the model customer. I told him he was the engineer of his journey, and he took that and ran with it, thinking outside the box to explore all his options.”